Visualizing how viruses spread in a population

We live in strange times. Canada cancelled hockey, Ireland closed its pubs, USA banned baseball. Large gatherings the world over are closed until further notice. People are working from home, afraid to go out.

Toilet paper is a rare commodity.

And it's all because of a novel coronavirus – Covid19 – turning into a global pandemic. We're told social distancing is our best bet to Flatten The Curve and save thousands, maybe millions, of lives.

But how much does social distancing really slow down the spread of Covid19?

I decided to build a simulation and see for myself.

You can watch the full build on YouTube, see the code on Github, and read on for interactive examples of past epidemics.

PS: you can read and share this online, adjust simulation sliders yourself :)

How big an impact does social distancing have?

Not much is known about Covid19 yet. We know it's about 2x as virulent as the flu and 30x as deadly. Each infected person infects 3 others on average (vs. 1.5 for flu).

A 3% mortality rate does not mean that 3% of the world will die. It means that if you have corona, you have a 3% chance of death from corona.

This huge difference in rate of infection is why you see some people saying "Eh way fewer people die than with regular flu".

Those people are wrong. Observe how social distancing saves lives 👇

Without social distancing the virus spreads through our population exponentially. Infections and deaths grow like crazy.

But add social distancing and the virus is so contained it barely spreads. A few people get infected, most recover, and that's it. No pandemic.

Try changing the social distancing slider yourself. See how different levels impact the spread of disease.

Here's what the sliders mean:

Comparing Covid19 with other epidemics

Let's start with the seasonal flu as our baseline.

Everyone gets it, nobody dies.

What about The Black Death?

We know it was deadly, spread fast, and that quarantines were attempted. 30% of Europe died and it took 200 years for the population to recover. yikes

In my simulation it's almost too deadly to spread.

A more recent famous epidemic was The Spanish Flu. Aided by compromised immune systems from the war, it killed millions.

The mortality rate of 4% is similar to Covid19, but a typical influenza lasts just 2 weeks vs. corona's 4 weeks. Far fewer people die as a result. The simulation even reaches herd immunity.

Now let's compare all that to HIV – a virus that's deadly, forever, and surprisingly difficult to get with a virality ranging from 0.04% to 1.4% in a single exposure.

What a huge difference that low virality makes 🤔

How the corona simulation works

If you're curious how this simulation works, here are some of the interesting bits. Watch the full build for details

I'm using the game loop approach to animation from ReactForDataviz. Render a bunch of dots, change their positions, re-render.

This gives us 60fps animation on most machines.

Rendering happens in a loop. Go through the population and render each member as a <Person> component.

The <Person> component takes care of colors based on infected, dead, and recovered flags. Renders a circle.

The usePopulation hook creates the initial population, lays it out on the page, and drives the simulation with a d3.timer.

I omitted some function arguments to keep the example cleaner. Comments explain the flow.

The interesting parts are collision detection and that initial population layout. Movement just adds random deltas to x and y of each person and infections are just a bunch of if statements.

The initial layout makes heavy use of D3's point scales – d3.scalePoint. They do most of the work for us.

This creates vertically spaced rows that fit into a given height.

Same approach works for each individual row – a point scale spaces members along a given width.

The other interesting part is detecting collisions between members of the population. Assuming a virus spreads through direct contact.

A clever use of D3-quadtree lets us avoid comparing every population member with every other member, which would grind our simulation to a halt. That's a O(n^2) algorithm.

A quadtree recursively partitions two-dimensional space into squares, dividing each square into four equally-sized squares. Each distinct point exists in a unique leaf node; coincident points are represented by a linked list.

You get a fast way to search "Is there a node within Width/Height of X, Y?"

So for collision detection you say "Is there a node within Size of This Node?". If there is, you have a collision.

Once you have the list of collisions, you go through them, calculate probability they got infected, and change their state.

Consider sharing this with friends :)

Social distancing schmistancing. How big a difference on #CoronavirusOutbreak can it really make?

Wanted to see for myself so I built this simulation. Adjust sliders, see how factors affect a pandemic. 🤔 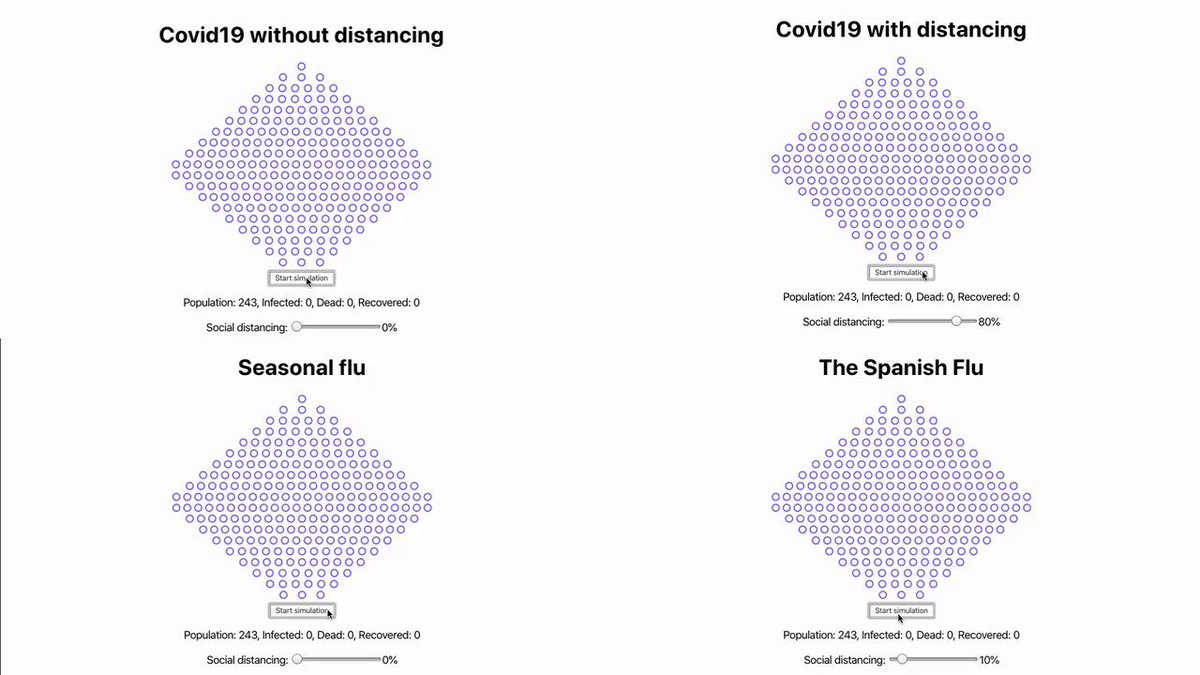