This is a Livecoding Recap – an almost-weekly post about interesting things discovered while livecoding. Usually shorter than 500 words. Often with pictures. Livecoding happens almost every Sunday at 2pm PDT on multiple channels. You should subscribe to  My Youtube  channel(https://www.youtube.com/user/theswizec) to catch me live.

Flamegraphs are great. They show you when you've been bad and made the CPU cry.

Here is a flamegraph built with React & D3. It shows some stack data I stole from the internet:

This is better. I'm gonna have to spend some time thinking about how to make individual nodes inspectable with a nice animated transition.

I assume that would be a useful feature @brian_d_vaughn ?

You can try it out here, and see the code on GitHub. Consider it a work in progress. Releasing as open source once the animation works smoothly :)

Here's how it works 👇

You have two components:

The <Flamegraph> component without animation takes your data, loops it through the array of entries at this level, and calls itself on data.children.

Our render method takes a bunch of params out of props, creates a linear D3 scale to make calculations easier, then renders an SVG grouping element.

Inside that element, we loop through the data, and for each entry, we create a new <React.Fragment>. The fragment contains <FlameRect> which represents the current datapoint, and a <Flamegraph> which renders all the child nodes.

We decide each element's x position based on the sum of all node values up to the current one. And we make sure the child <Flamegraph> uses the same width as the current node. This creates the neat stacking effect.

The <FlameRect> component takes care of choosing a random color on initial render, highlighting when clicked, and displaying a label if there's enough space.

We render a grouping element that contains a <rect> and a <text>. The rect gets sizing and color information, and the label gets a ref callback and some text.

We use the ref callback to dynamically detect the size of our label and hide it if necessary. That happens in labelRefCallback.

onClick, we flip the selected state.

And well, that's it. You can think of this component as a basic toggle component. Uses all the same logic, just renders as a colorful rectangle instead of a button.

Where it gets tricky is adding animation that lets users explore their data. Turns out deeply nested React elements are hard to animate smoothly.

Smoothly animating recursive structures is hard. @brian_d_vaughn might not get the flamegraph shininess I half promised 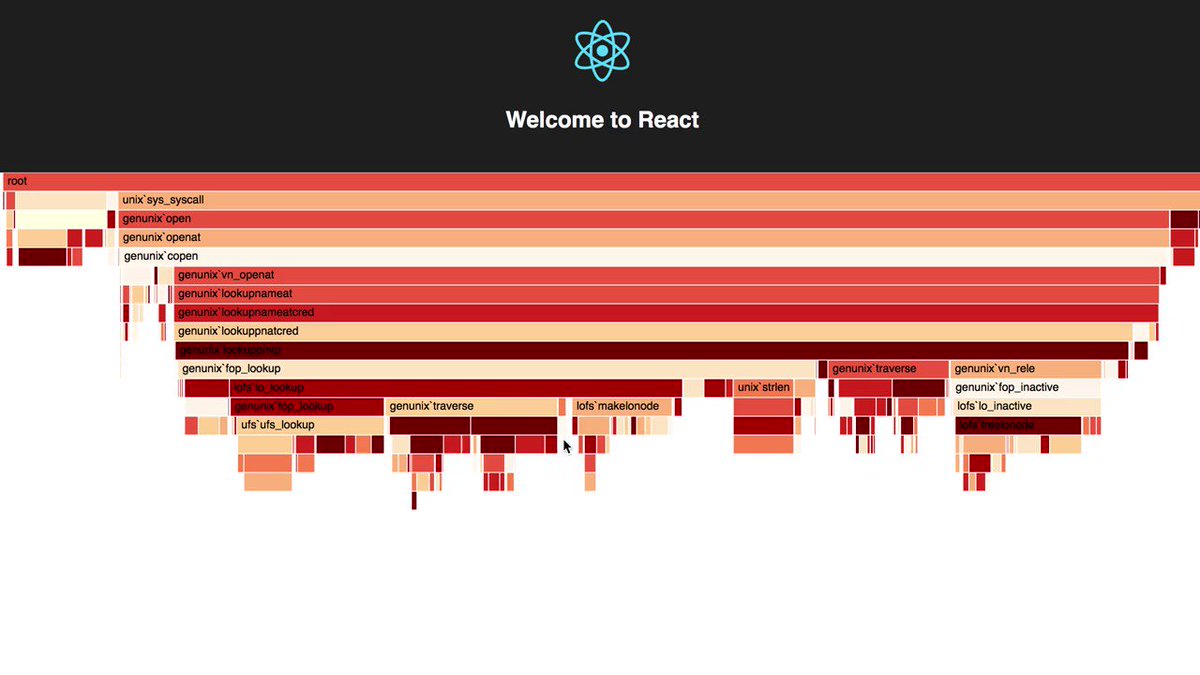 The worst part is how long it takes before React even propagates prop updates through the tree before the animation even starts. Once the animation is running, it's smooth as silk.

But getting it started, ho boy.

This warrants further research. I'll be back :)