Render a Histogram of salaries

Knowing median salaries is great and all, but it doesn't tell you much about what you can expect. You need to know the distribution to see if it's more likely you'll get 140k or 70k.

That's what histograms are for. Give them a bunch of data, and they show its distribution. We're going to build one like this: 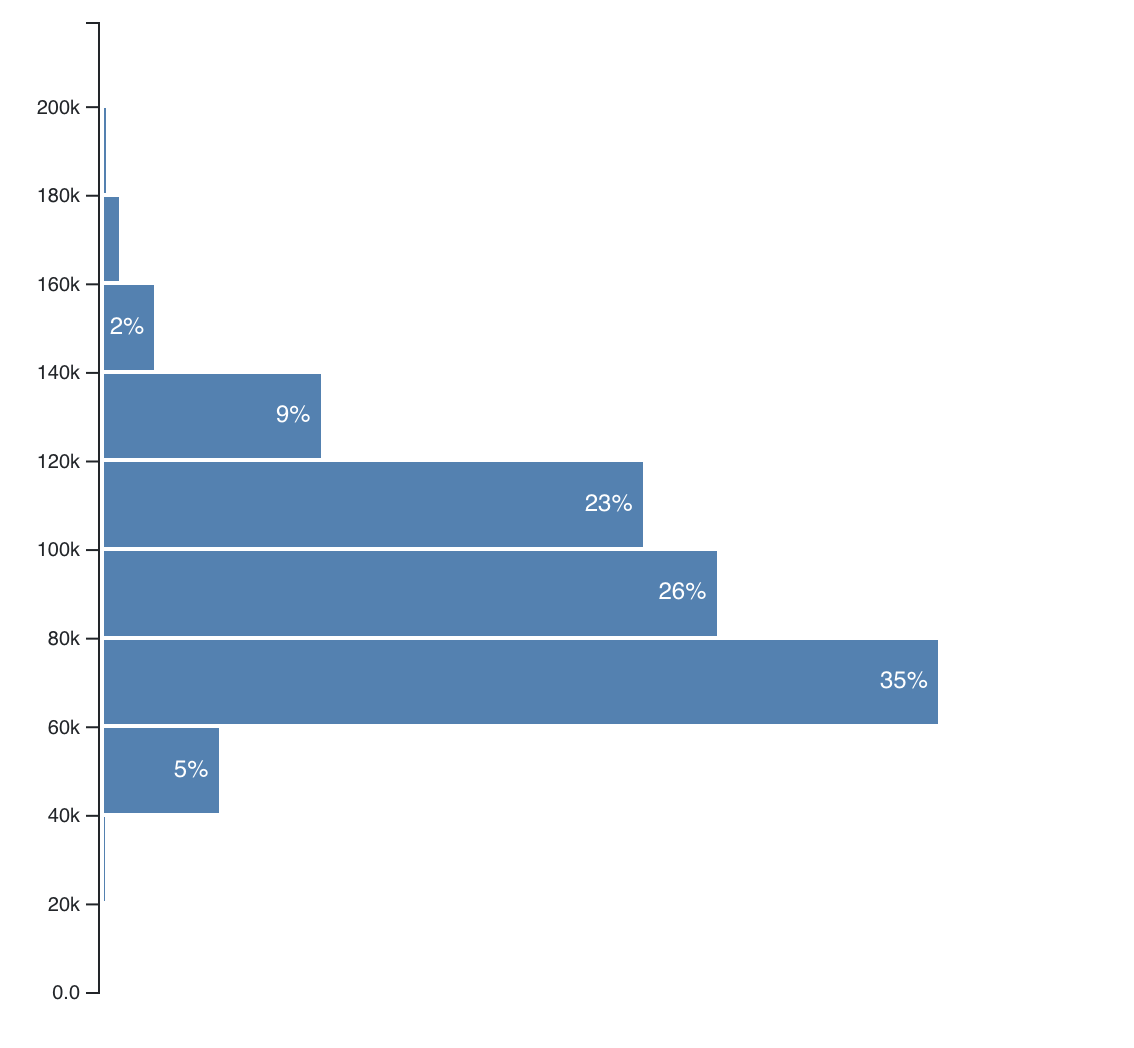 It's where statistics like "More people die from vending machines than shark attacks" come from. Which are you afraid of, vending machines or sharks? Stats say your answer should be heart disease. 😉

We'll start our histogram with some changes in App.js, make a Histogram component using the full-feature approach, add an Axis using the blackbox useD3 approach, and finally add some styling.

You know the drill, don't you? Import some stuff, add it to the render() method in the App component.

We import style.css and the Histogram component. That's what I love about Webpack - you can import CSS in JavaScript. We got the setup with create-react-app.

There are competing schools of thought about styling React apps. Some say each component should come with its own CSS files, some think it should be in large per-app CSS files, many think CSS-in-JS is the way to go.

Personally I like to use CSS for general cross-component styling and styled-components for more specific styles. We're using CSS in this project because it works and means we don't have to learn yet another dependency.

After the imports, we can render our Histogram in the App component.

We render the Histogram component with a bunch of props. They specify the dimensions we want, positioning, and pass data to the component. We're using filteredSalaries even though we haven't set up any filtering yet. One less line of code to change later 👌

That's it. App is ready to render our Histogram.

You should now see an error about missing files. That's normal.

As mentioned, opinions vary on the best approach to styling React apps. Some say stylesheets per component, some say styling inside JavaScript, others swear by global app styling.

The truth is somewhere in between. Do what fits your project and your team. We're using global stylesheets because it's the simplest.

Create a new file src/style.css and add these 29 lines:

We won't go into details about the CSS here. Many better books have been written about it.

More CSS than we need for just the histogram, but we're already here so might as well write it now.

Adding our CSS before building the Histogram means it's going to look beautiful the first time around.

We're following the full-feature integration approach for our Histogram component. React talks to the DOM, D3 calculates the props.

We create the Histogram.js file. Start with some imports, a default export, and a stubbed out Histogram class.

We import React and D3, and set up Histogram with 3 D3 elements

First, we configure the histogram generator. thresholds specify how many bins we want and value specifies the value accessor function. We get both from props passed into the Histogram component.

In our case that makes 20 bins, and the value accessor returns each data point's base_salary.

We feed the data prop into our histogram generator, and count how many values are in each bin with a .map call. We need those to configure our scales.

If you print the result of histogram(), you'll see an array structure where each entry holds metadata about the bin and the values it contains. 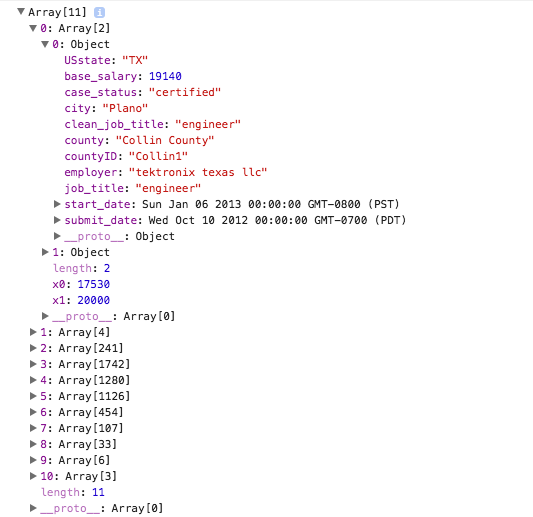 Let's use this info to set up our scales.

widthScale has a range from the smallest (d3.min) bin to the largest (d3.max), and a range of 0 to width less a margin. We'll use it to calculate bar sizes.

yScale has a range from 0 to the largest x1 coordinate we can find in a bin. Bins go from x0 to x1, which reflects the fact that most histograms are horizontally oriented. Ours is vertical so that our labels are easier to read. The range goes from 0 to the maximum height less a margin.

We take everything we need out of state and props with destructuring, call histogram() on our data to get a list of bars, and render.

Our render method returns a <g> grouping element transformed to the position given in props and walks through the bars array, calling makeBar for each. Later, we're going to add an Axis as well.

This is a great example of React's declarativeness. We have a bunch of stuff, and all it takes to render is a loop. No worrying about how it renders, where it goes, or anything like that. Walk through data, render, done.

Setting the key prop is important. React uses it to tell the bars apart and only re-render those that change.

Before our histogram shows up, we need another component: HistogramBar. We could have shoved all of it in the makeBar function, but it makes sense to keep separate. Better future flexibility.

You can write small components like this in the same file as their main component. They're not reusable since they fit a specific use-case, and they're small enough so your files don't get too crazy.

But in the interest of readability, let's make a HistogramBar file.

We start by deciding how much precision to put in the label. Makes the smaller bars easier to read :)

Then we render a rectangle for the bar and add a text element for the label. Positioning based on size.

You should now see a histogram. 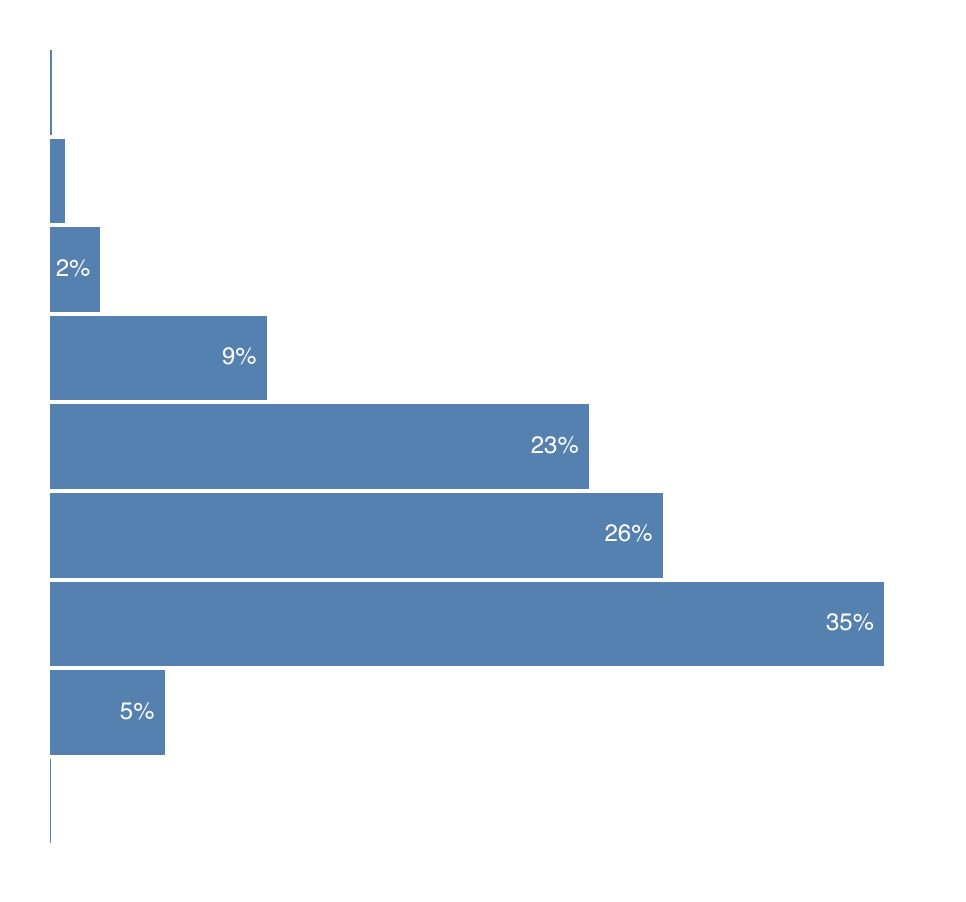 Our histogram is pretty, but it needs an axis to be useful. You've already learned how to implement an axis when we talked about blackbox integration. We're going to use the same approach and copy those concepts into the real project.

We can use the useD3 hook from my d3blackbox library to make this work quickly.

To render our new Axis, we add it to the Histogram component. It's a two step process:

We import our Axis and add it to the render method with some props. It takes an x and y coordinate, the data, and a scale. 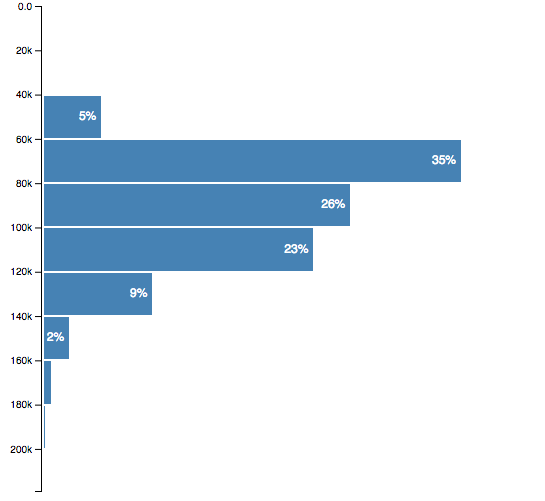 If that didn't work, try comparing your changes to this diff on Github.